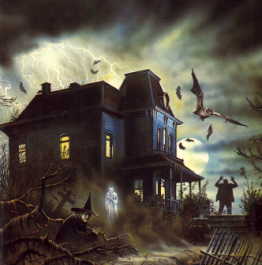 Thank you to everyone who followed my Halloween Marathon.
I've posted 31 stories or poems since October 1st.
Here is the final installment.
HALLOWEEN FRIGHT
There’s a story that’s told about Halloween night;
The details are sketchy, but oh what a fright.
If you think about ghosts and screeching black bats,
Then add a few witches with pointy black hats,
You can start to imagine the harrowing scene,
And the facts that led up to the bone-chilling scream.
A figure was seen walking past in the dark,
He had an odd shape; his feet left no mark.
He floated past windows and over the lake,
But cast not a shadow; no sound did he make.
No witness could pinpoint the sight they had seen;
It could have been real or maybe a dream.
But just after midnight a scream ripped the night,
The wind blew a chill through covers held tight.
Who was alone in the woods at this hour?
Why did they scream; where did they cower?
With nerves set on edge and fear in his heart,
Young Johnny McGee set off through the dark.
The sight he discovered has not come to light,
For Johnny McGee never spoke of that night.
In fact, young McGee never spoke again ever,
The fright of that night changed Johnny forever.
So watch where you roam on Halloween night,
If you go out alone, please stay out of sight.
There are scary black cats and goblins out there,
And strange ghostly shadows floating on air -
You might see McGee out taking a walk,
He may tip his hat, but never will talk.
Posted by Rita at 1:50 PM