Poem: It Really Was That Kind Of Day 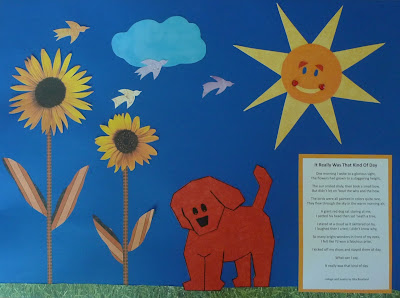 collage and poetry by Rita Bourland

It Really Was That Kind Of Day

One morning I woke to a glorious sight,
The flowers had grown to a staggering height,

The sun smiled shyly, then took a small bow,
But didn’t let on ‘bout the why and the how,

The birds were all painted in colors quite rare,
They flew through the sky in the warm morning air,

A giant red dog was staring at me,
I patted his head, then sat ‘neath a tree,

I stared at a cloud as it skittered on by,
I laughed then I cried; I didn’t know why,

So many bright wonders in front of my eyes,
I felt like I’d won a fabulous prize,

I kicked off my shoes and stayed there all day,

What can I say,

It really was that kind of day.

Poem - Do Others Cry Too? 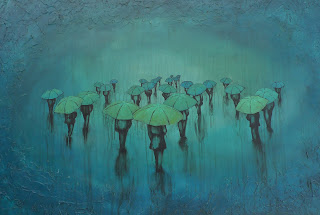 Do Others Cry Too?

So tragic the death,
so senseless the act,

How do they help
ease the pain from the loss?

Do others cry too?

What should we do
about bullets and guns,
mental health funds,
youth who are lost,
what is the cost
to us all?

They each had a name,
life left to live,
people to love,
folks to forgive,

but how to forgive
the man with the gun
who likely was lost,
his life also tossed to the wind?

How to bring change
to a world full of strange, random deeds?

My tears are misspent,

I must be the change that I seek.

I met the artist, Kendra Baird, at the Columbus Arts Festival.  She and I talked about my blog and she gave me permission to take some photos.  When I started writing about the tragic shooting in Colorado, I immediately knew which painting I wanted to use.  Please visit her website.  She is a gifted artist. 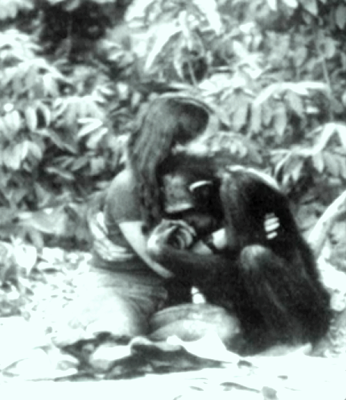 Before you read what I have to say,
just take a moment to really look at this picture.

Lucy, a chimpanzee born in 1964, was raised by Maurice and Jane Temerlin.

Soon after she was born, she was removed from the Institute for Primate Studies in Oklahoma and raised in the Temerlin's home.  They made every attempt to make her experience as 'human' as possible. This was the Temerlin’s intent and part of their grand experiment.

She learned to dress herself, eat at the table with a fork and knife, flip through magazines, make tea for guests and was eventually trained to use 140 language signs.  She also developed a liking for gin.  Having never been exposed to other chimps, she also enjoyed looking at pictures of humans more than her own species.  In every way, her species identity was erased.

As she grew, she became stronger and more aggressive and the Temerlins were forced to take her to a chimpanzee rehabilitation center in Gambia.  She never fully acclimated to her new surroundings.

A graduate student named Janis Carter worked with her for several years trying to assist her in her transition. During that time, Lucy appeared to be depressed and often signed the word ‘hurt’.   Janis eventually had to leave.  The photo above was taken after Janis had been gone for a year and returned for a visit.  Lucy greeted her on the beach, then turned and walked away with a group of other chimps.  Janis took this as a sign that Lucy had adjusted to her new life in Gambia.

One year later, Lucy was found dead having most likely been killed by poachers.  Because she was so trusting of humans, there is some thought that she may have approached the poachers instead of running away from them.

I heard this story on Radio Lab.  I would encourage you to listen to the whole story to get a better sense of all the dynamics at play.

I just can’t stop thinking about that photo.

Photo from Wikipedia:  Janis Carter saying goodbye to Lucy
at a Chimpanzee Rehab Center in Gambia 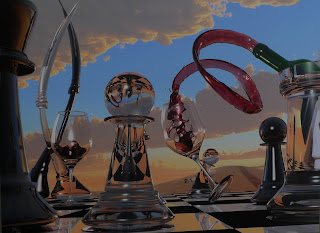 Artwork by Beau Tudzarov – photo taken at Columbus Arts Festival by Rita Bourland
Please check out his amazing website.  Here is a poem inspired by his art.

I may have judged too soon,
seeing the glass half empty
instead of brimming
with hope,

wondering why
I feel depleted,
like a tank on empty,

merely
needing an infusion
of perspective
replete with wonders
of illusion,

mind-bending tricks
to soothe the realities
asleep at my feet,

bring on the wonders,
the fun house mirrors,
show me magic,
fill my cup with nectar sweet,

set me free
to see the gilded gifts
in front of me.

I Am Powerless - Storms through Ohio 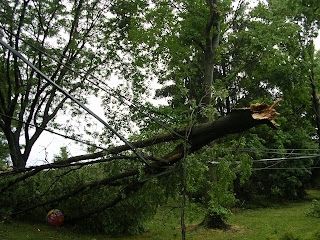 It is the 5th day without power and I (along with about 200,000 others) am being tested both physically and emotionally.  How to keep my sanity when it’s 95 degrees or higher every single day?  The heat has permeated my brain, making simple decisions quite difficult.

I am powerless,
sitting limply in a pool of sweat
controlling nothing,

Mother Nature
brought the winds,
uprooting trees,
laying them on the ground
in an intricate game of pick-up sticks
for mere mortals to
unravel,

with no relief in sight,
a mirage
would be welcome,
if only to offer images
of coolness and comfort,

I cling to my tentative
hold
on patience,
trusting power
will return before sanity snaps,
much like the lines
felled by mighty trees
brought to their knees
by the storm.