Mark Twain Still Speaks to Us 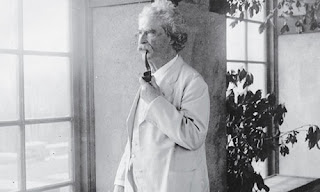 “Anger is an acid that can do more harm to the vessel
in which it is stored than to anything on
which it is poured.”
Mark Twain (1835-1910)
In recognition of the release of Mark Twain’s autobiography (100 years after his death), I thought I would write about one of his many thought-provoking quotes.  He was a man of carefully chosen words: sometimes audacious, often political and usually humorous.  He never failed to stir discussion with what he had to say.  By stipulating in his will that his autobiography not be released for 100 years, he is still stirring discussion.
Words are powerful, provocative and the stuff of humanity.  They connect us, divide us and console us.  Mark Twain was a master of words.
The quote about anger stirred some deep feelings in me.  I have been angry before and have felt acid coursing through my veins.  The anger might have been stirred because I felt wronged or I perceived an injustice in the world; in either case, it ate away in a corrosive, unhealthy way.  Leaving the anger to fester made me feel sick, dissatisfied and in emotional limbo.
But what are we to do with anger?  Pouring it out through confrontation presents the opportunity to harm others, so that is not necessarily the best option.   If we see injustice in the world, it is certainly appropriate and indeed essential to turn that anger into positive proactive energy
But to truly get ride of anger, de-stressing is the best choice.  Just let it go - take a walk, take a bath, take a nap, and know with some cosmic certainly that all things will balance out in the end.
Putting it in my own words,  Anger is a tricky beast, best tamed by those with proper experience, possibly in the area of lion taming.
Lion Taming
You can roar with raw anger,
Throw a tough punch,
Seethe through clenched teeth,
Fume, seethe and fuss,
You can kick a tin can,
Frown and complain,
Curse to the heavens,
Find others to blame,
But all of that strife
Won’t do any good,
In fact you might find
You’re in a bad mood,
Just let it all go,
Breathe deeply, count sheep,
It’s not worth your time
Haulin' troubles so deep,
Don’t harm your own vessel,
Twain said way back then,
Just smile and whistle
Then set off again,
Sayin’ Peace and Amen.
Posted by Rita at 4:50 PM