How I Got My Hipster Cred 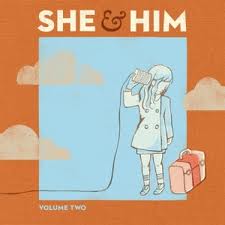 I'm 57 years old, love James Taylor, Fleetwood Mac and Neil Young, but I like to pay attention to new artists.  I read a great review of an album called She and Him (2010), so I went out and bought it.  Zooey Deschanel wrote all but two of the songs and sings all of them.  She performs with M. Ward and special guest singers Tilly and the Wall and Mike Coykendall.  They have an upbeat, infectious sound that I find myself humming at odd moments.  Zooey's music makes me happy.
Me and You is a fantastic song with the refrain,


You've got to be kind to yourself
You've got to be kind to yourself.
In the Sun has the refrain:
"Well alright,
It's okay,
We all get the slip sometimes every day
I'll just keep it to myself in the sun
In the sun."
She also sings a song that was written in 1952 by Milton Kellem called Gonna Get Along Without You Now.  It's a catchy and fun tune about a woman who has been cut loose from a bad relationship and is moving on with optimism.
My 26 year old son told me this evening that I had no idea how much hipster cred I was earning by buying this album. He was right - I had no idea.  He commented that not many people my age would even know about She and Him.  So, this evening I am basking in the glow of my brief moment in the limelight of hipsterdom.  My cred, or credibility like we adults might say, is for real and I know what is happening out there in the world.  Just ask me what is cool and I will tell you.  Well, actually I probably won't since I have a feeling I am a one horse wonder in the world of hipster cred, but I will unconditionally recommend this album to anyone who cares to listen.  Buy it and you will be glad you did and you might just earn a little hipster cred along the way.
Posted by Rita at 10:14 PM