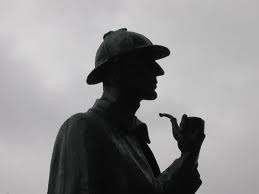 Case Closed
Living in a big city presents a unique set of problems. There are ongoing issues of traffic, noise, road construction, detours, and people behaving badly.  It’s hard to feel empowered to impact any of these.

When I started hearing a constant noise every time I stepped foot in our backyard, I didn’t immediately feel like I could do anything about it.  I did the initial cursory walk through the neighborhood to see if I could find the source, but to no avail.  It was a high-pitched noise, sort of like a low decibel tornado warning.  It started really getting under my skin and inside my head.  My husband could hear it too.

I did a drive-around about a week ago, but couldn’t find the source.  I told myself that even if I found the source, it would be difficult to negotiate a fix to the problem.

Tonight, when my husband got home from work, he said we should get on our bikes and try to pinpoint the offensive noise.  We rode through the neighborhood with our ears cocked.  We wound past houses and condos, eventually weaving between office buildings.  We ventured onto a busier street, and still following our ears, pulled between two restaurants.  Feeling a rush of adrenaline, we realized the noise had reached its loudest peak and we had found the culprit.

The squeal was emanating from what looked to be the hood vent fan on top of the Poong Mei Korean/Asian Bistro, almost a mile from our house.  I asked my husband to watch the bikes and I went inside.  A lovely Korean woman approached the counter.  It was 4:00 in the afternoon and she and a gentleman (probably around 40 years old) were the only people in the restaurant.  To kill time while I considered my options, I asked about their carry-out menu and then she told me about the special discount nights the owner planned each week.  When she made the comment about the owner, she pointed to the gentleman sitting at the back table.  I made a quick decision and asked if I could speak to him.  I explained the noise problem and asked him if he would accompany me outside so he could hear the offending noise for himself.  I tried to be incredibly polite.  He looked at me a bit bemused (can you blame him) and followed me outside.

My husband was waiting with the bikes, so we all walked over to the side of the building and I pointed out the problem and explained that we could hear it very far away.

Now, here comes the best part.  He was incredibly kind and apologetic.  He got on his cell phone and called his maintenance person and told me they would look into it tomorrow.  He said that it may have saved him from having a more serious problem down the road.  We thanked him profusely for taking action and for listening to our concerns.

We rode away with great satisfaction, knowing we had actually made the city a few decibels quieter.  How empowering!  We also found our new favorite restaurant.  How can we not frequent a place with such an incredibly nice owner?

If you live in Columbus, OH, please go to the Poong Mei Korean/Asian Bistro on Reed Road. Any owner of an establishment who conducts himself in such a civilized manner deserves the highest recommendation.

Big cities aren't so bad after all.
Posted by Rita at 7:18 PM