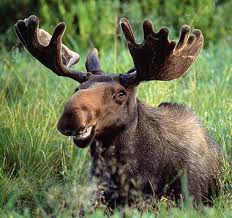 Magical Mark and a Moose Named McGee
Magical Mark went to Maine on a lark,
He met a large moose named McGee,
McGee liked to tromp through the words after dark,
And play hide and seek ‘neath the trees,
They met in a meadow last Monday at noon,
Both strangely bemused by their view,
Mark had a bunny and shiny black hat,
McGee had a funny left shoe,
Mark put the bunny inside of the hat,
Then waved his wand high with a flair,
With a presto and loud Bingle Bang Boom,
The bunny was lost in thin air,
McGee was confused by the magic of Mark,
He looked high and low for the hare,
He then felt a twitch on the hair of his back,
And turned with an innocent stare,
There on his back sat the bunny so fine,
Sipping a cup of hot tea,
McGee trotted off with the bunny in tow,
To eat some fine lobster and brie,
Mark had a lark on his first trip to Maine,
He knew that his magic went well,
But then he looked down and stared at his feet -
Here’s the funniest part of this tale,
On his left foot was a funny moose shoe,
Too big for a magical guy,
McGee so it seems was magical too
Mark pondered the where and the why -
Oh My!
Posted by Rita at 4:23 PM