A Pocketful of Stones 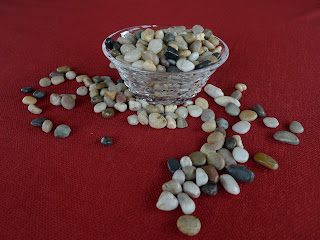 Photo by Rita Bourland © 2012
A Pocketful of Stones


Once upon a time there was a boy who collected small stones.  He stooped to pick them up on his way to school, on his way to the park and while he was out playing.  They found their way into his jeans, his coat pockets, his shoes, his socks, his bed and his backpack.  He had a jar in his room where he dumped them, but many fell out elsewhere.  His mother grumbled when they got sucked into the vacuum or tumbled noisily in the dryer.  His father exclaimed when he stepped on one with his bare feet.  The day one got mixed in with the cereal caused quite a stir, as well as a mad rush to the dentist.  And then there was the time a few fell into the bathtub and clogged the drain.
The boy’s parents were confused by his obsession with stone collecting.  They asked him why he persisted; they pleaded with him to stop.  They bribed him with toys and movies and they disciplined him with time outs and missed meals.  Nothing worked.  They grudgingly gave up and accepted their son’s peculiar habit.
Years went by.  The stones got larger and rarely made their way into the house anymore.  They were strewn about in the backyard, wreaking havoc on the lawn mower. The boy started shaping them with a chisel and mallet; making stone dogs, cats, frogs and turtles.  Stone dust lay across the lawn like powder from a fresh snow.
Pretty soon the stones were too big to bring home at all.
The boy traveled to Italy and apprenticed with a master carver.  He stayed for four years.  Then he found his way to Canada and worked for two years with Inuit stone carvers.  He also spent time in Indiana shaping stone from the limestone quarries.
The boy’s parents still occasionally found a stone around the house, but always made sure they placed it in the jar in the boy’s room.  When their friends came to visit, they marveled at the sculptures in the backyard.  They offered to buy them, but the parents could not be persuaded to part with them.
The boy returned home at age twenty-eight.  He drove past his parents’ house and headed to the town square.  There, he and a crew of twenty workers unloaded a stone statue which stood twelve feet tall.  It was a wondrous carving with intertwining figures of people, horses and birds, all reaching upward toward some unknown vision.
It was the first of hundreds the boy would carve in his lifetime.
He returned home once a year with a pocketful of stones.  Each was carved into an intricate shape of rare beauty.  He dumped them on the table and told his parents where he had found each one, and that as he carved he allowed the stones to help shape their stories.  As he spoke, he held the stones with tender reverence in the palm of his hand; the very same hand that had collected stones so lovingly as a very small boy.
* Sometimes, the path to your future is as close
as the pebbles beneath your feet.
Posted by Rita at 5:04 PM