Once Upon a Time: Grace in Return 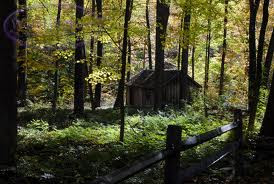 Grace in Return
Once upon a time there was a bitter old woman who lived alone in a house in the deep, dark woods.
When she was young, her heart had been healthy and whole, pumping goodness into the world and accepting gratitude and grace in return.
But then life came along and upset the balance.  Hardship came knocking, losses occurred and bitterness settled into her bones.  The longer she lived alone and brooded on the past, the smaller her heart became.
It just so happened that the old woman’s house was right in between two small villages.  The most direct route to Fairhaven from Bountiful was a path through the woods passing right in front of her doorstep.  The path was rarely taken because travelers worried about wild animals, insects, snakes and darkness, but truth be told, they mostly worried about the old woman.
There were rumors of lost children, lost pets and people losing their minds.
Daisy Dunworth didn’t worry about such things; in fact, she didn’t worry about much of anything.  She wandered about with a smile on her face, staring up at the clouds or down at the tiniest of ants.  She was equally fascinated with both.
Daisy’s dear Aunt Bessie lived in Fairhaven and was recovering from pneumonia.  Daisy decided to visit her each day to cheer her up during her recovery.  Every morning she packed her bag with a picnic lunch and a book to read to her aunt.  As she traveled through the woods she often stopped to gather some wild flowers to put in a vase at her aunt’s bedside.  As Daisy passed the old woman’s house she sometimes dropped a flower on the porch and occasionally, as days turned to weeks, she dropped a small package of cookies or a slice of apple pie.
As soon as the young woman was out of sight, the old woman opened her door to see what gift had been shared.  Her eyes darted left and right as she grabbed the treat and once again receded into the darkness.
One day, Daisy stopped at the old woman’s door to leave a treat and saw a small package wrapped in brown paper.  There was a note printed on top.  It simply said:  Thank You.  Daisy knew the gift was for her, so she knelt to pick it up then sat down on the stoop to open it.
She discovered a photo in a delicate frame. It was a young woman dressed in a satin gown standing next to a handsome gentleman.  The joy on their faces made Daisy’s heart smile.  She knew the gift was priceless and also knew it was not hers to keep.  She timidly knocked on the door.
The old woman opened the door a crack and beheld the lovely smile of Daisy.  As light filtered in, the door swung wider and Daisy opened her arms to embrace the lonely woman who had, seemingly, not forgotten the meaning of love.
May your heart be light, your worries take flight
and the gift of pure love be with you tonight.

Labels: bitterness, giving, love, moral, once upon a time, sharing