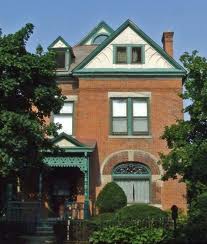 Thurber House - Columbus, Ohio
James Thurber (1894-1961) is best remembered for his New Yorker cartoons and short stories, but is also treasured for his many books: My Life and Hard Times, A Thurber Carnival, The 13 Clocks, Many Moons,  My Year with Ross and several others.  He grew up in Columbus, Ohio and his childhood home has been preserved and now houses Thurber House a non-profit organization with the following mission statement: Our mission is to celebrate the written word for the education and entertainment of the broadest possible audience and to continue Thurber's legacy of humor. Thurber House: Where laughter, learning and literature meet.
Inside Thurber House you will find the James Thurber Museum, a bookstore and the offices of the Thurber House staff.  There is an upstairs apartment that is the summer home to a children's author-in-residence each year.  Thurber House sponsors evenings with authors, literary picnics, writing workshops and the annual Thurber Prize which is given to an outstanding humor writer.  The award is presented at the Algonquin Hotel in New York City and the author speaks in Columbus a few months later at the Thurber Birthday Gala.
There is much to learn about James Thurber and this wonderful organization.  A good place to start is to read one of his books.  I forgot to mention that his home is thought to be haunted.  Several people have had unusual things occur while in the house.  An episode of Ghost Hunters was shot there last year.  Here is my poem about the incomparable James Thurber and the home that keeps literature vibrantly alive in the city of Columbus.
Thurber House
The house speaks
‘Neath the eaves,
On wooden stairs
It speaks,
Stories whisper
Through the rooms,
James alive
In vivid words,
His genius quite the treat,
Laced with images complete,
He lingers in the shadows,
Creaking, crackling
In delight,
We need not fear
His presence here
For humor
Fills the site,
Thurber reigns
A treasured king,
Written words his
Royal crown,
His life and times
We keep alive
Lest others dare forget,
James Thurber’s wicked wit.
Posted by Rita at 2:37 PM