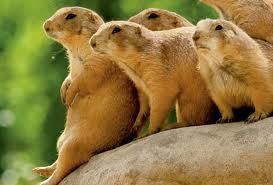 Columbus, OH - APB - Prairie Dogs on the Loose
I’m envisioning a middle of the night escape.  After hours of planning, sketching and endless discussion the prairie dogs executed their escape.  Twenty of them had recently been transported to Columbus from another zoo and had been quarantined for a period of time before being moved to temporary quarters to await the onset of spring.  The zoo planned to move them to the regular prairie dog exhibit at that time.

I don’t think the zoo knew who they were dealing with.  Eleven of these wily creatures made their break and only four have been found.  We are talking about some of the best burrowers in the world who know how to dig a tunnel in a hurry.  They also have a very sophisticated ‘language’.

The following excerpt from Wikipedia highlights their high intelligence:

“In 2010, Professor Con Slobodchikoff, a biologist from Northern Arizona University has discovered that the prairie dogs can chat with advanced 'language', their distinct squeaky bark, which contains a great deal of information that can describe colors, size, directions of travel, speed and even different types of predators.”
They are also quite sociable, often dropping by each other’s burrows to visit.  They greet each other with a sort of kiss (see adorable YouTube video).

Citizens in the neighboring community of Powell (Columbus suburb), have been alerted to be on the lookout for the fugitives.  They have been told to call the zoo rather than attempt to catch the escapees.  Although not dangerous, the zoo does not want them harmed in any way. I'm thinking the remaining seven on the lam may already have a ticket to warmer climes. Why stick around snowy Ohio when they can board a bus for Vegas?  Now that's somewhere they'll never be found.


There are big things going on here in Columbus.  We have criminals on the loose, drug problems in the inner city, homelessness and now this.  I’m just hoping our new governor can handle this without it devolving into Prairiegate.  Be on the lookout.  A prairie dog might be looking back at you.  If you find one, send him C.O.D to The Columbus Zoo and Aquarium, Columbus, Ohio.  I think they could use some help on this one.
http://www.dispatch.com/live/content/local_news/stories/2011/01/07/Columbus_Zoo_searching_for_missing_prairie_dogs.html?sid=101
Posted by Rita at 3:20 PM