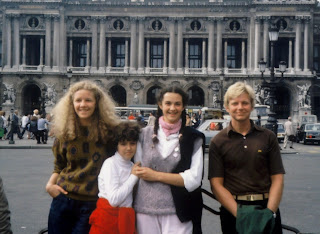 1980 Paris, France - Laurenz, Sophie, Tanya and Mike
In 1980, when my husband Mike was 29 and I was 27, we took an epic bicycle journey through Europe.  Over three months, covering 3000 miles, we bicycled through Germany, France, Italy, Belgium and Greece. We set a budget of $30 a day that included all food, camping fees and occasional train or ferry passes.  Besides our flights going and coming from the U.S., we took one flight from Athens, Greece to Paris, France to expedite our journey.  Each time we flew, we had to box up our treasured bikes for their own journey in the baggage hold.  Thirty years later, I can remember entire days from our trip.  Many of them include the kindness and generosity of strangers.

After spending three weeks in Greece in the middle of our trip, we flew from Athens to Paris on July 19th, landing at a very busy Orly airport.  We collected our bikes (thankfully undamaged) and considered our options.  We were both extremely tired from spending a sleepless night in a very chaotic Athens airport (forming lines for any reason seemed unnecessary!).  Finding a campground or youth hostel was at the top of our list.  I approached the tourist information counter, explained our situation to a delightful French employee (we later learned she spoke 7 languages) who listened with great interest.  She seemed quite intrigued by our bicycle travels.  After discussing several options, and no doubt sizing us up, she spontaneously invited us to stay at her house.  Being wary Americans, we were at first a little reticent to take her up on her offer, but she was so engaging and enthusiastic that it seemed like accepting was the right thing to do.  It was.Over the next four days we were ensconced in a cozy third story room of a charmingly old stone house in the suburb of Athis-Mon.  We dined on sumptuous meals, were taxied all over Paris and engaged in fascinating conversations with Nadia, her husband Jean-Jacques (a doctor) and their three daughters, Tania (17), Lorenz (15) and Sophie (9).  We discussed the French health-care system, visited the Eiffel Tower, ran errands with Nadia (who circumnavigated the city with a race car driver’s abandon) and saw the last day of the Tour de France. Magnifique!  We embraced this family and they embraced us with generous hearts and curious minds.  The memories of our trip include dates, locations, miles traveled and sites seen, but the lasting memories are of the people who touched our lives.

It’s been thirty years; it might be time for another epic journey.

Epilogue:  We stayed in touch with our host family for several years but ultimately lost touch.  Nadia and her husband divorced, she moved, and our last correspondence was returned.  I may do an internet search someday to try and locate them once again.
Posted by Rita at 11:38 AM